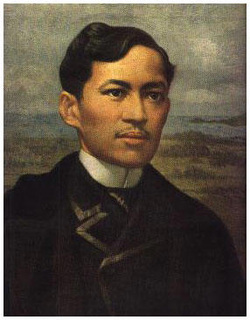 Jose Protacio Mercado Rizal y Alonzo Realonda, better known as Dr. Jose Rizal,  is the national hero of the Philippines. He was born on June 19, 1861, in the municipality of Calamba, Laguna. He was the seventh child out of the eleven children of Francisco Rizal and Teodora Alonzo y Quintos, both who were well educated and belonged to prominent families.
When he was around sixteen years old, he attained excellency in Ateneo Municipal de Manila. In the same year, he enrolled at University of Santo Tomas and passed the Surveyor's examination at the age of seventeen. He had to stop his studies because he felt that his fellow Filipino students were singled out. He went to Spain where he continued his studies and enrolled at Unibersidad Central de Madrid. When he was twenty three years old, he passed the licensure exam of medicine and a year later, he finished his course in Philosophy.

In the hope of helping his country and educate his countrymen, Rizal wrote his daring book, NOLI ME TANGERE, a satirical novel exposing the arrogance and tyranny of the Spanish clergy, was published in Berlin. On September 18, 1891, EL FILIBUSTERISMO, his second novel and a sequel to NOLI ME TANGERE and more revolutionary and tragic than the latter, was printed in Ghent.
Because of his fearless exposures of the injustices committed by the civil and clerical officials, Rizal provoked those who were in power. This led himself, his relatives and countrymen into trouble with the Spanish officials of the country. As a consequence, he and his friends were in pursuit. The authorities were not only to find him guilty but also accusing him with lies. Thus, he was imprisoned in Fort Santiago from July 6, 1892 to July 15, 1892 . While exiled in Dapitan, he engaged in agriculture, fishing and business; he maintained and operated a hospital; he conducted classes- taught his pupils the English and Spanish languages, the arts.

He did some researches and collected specimens; he associated with renowned men of letters and sciences abroad. His sincerity and friendliness won for him the trust and confidence of even those assigned to guard him. His good manners and warm personality were found irresistible by women of all races with whom he had personal contacts. His intelligence and unassuming nature gained for him the respect and admiration of prominent men of other nations while his undaunted courage and determination to uplift the welfare of his people were feared by his enemies.

When the Philippine Revolution started on August 26, 1896, his enemies were successful in obtaining witnesses. Thus, from November 3, 1986, to the date of his execution, he was again committed to Fort Santiago. In his prison cell, he wrote the poem "Ultimo Adios" in which is considered a work of art expressing not only the hero’s great love of country but also that of all Filipinos. After a mock trial, he was convicted of rebellion, sedition and of forming illegal association. On December 30, 1896, Rizal, a man whose 35 years of life had been packed with varied activities which proved that the Filipino has capacity to equal if not excel even those who treat him as a slave, was shot at Bagumbayan.

Jose Rizal's Execution
Jose Rizal, a great and humble man that he was, inspired not only the youth, but also every Filipino. He taught us how to honor and love our country like he did. Furthermore, He also taught us that where there is desperation, there is always hope. Most of our fellow Filipinos have the perspective that he modernized the true meaning of heroism and bravery. In addition to his remarkable works, he made an astonishing feat that he may have set a bar in which no Filipino may be able to surpass, ever. We, students of Malayan Colleges of Laguna made Dr. Jose Rizal our role model for the reason that with he is a great example being excellent and virtuous. May we all reflect on the wonderful things which he had envisioned we'd be, and hopefully start making progress towards reclaiming the honor of being of the same country, the same blood, as him.
comments powered by Disqus